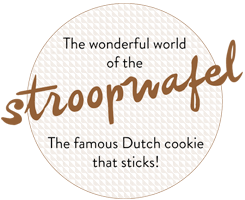 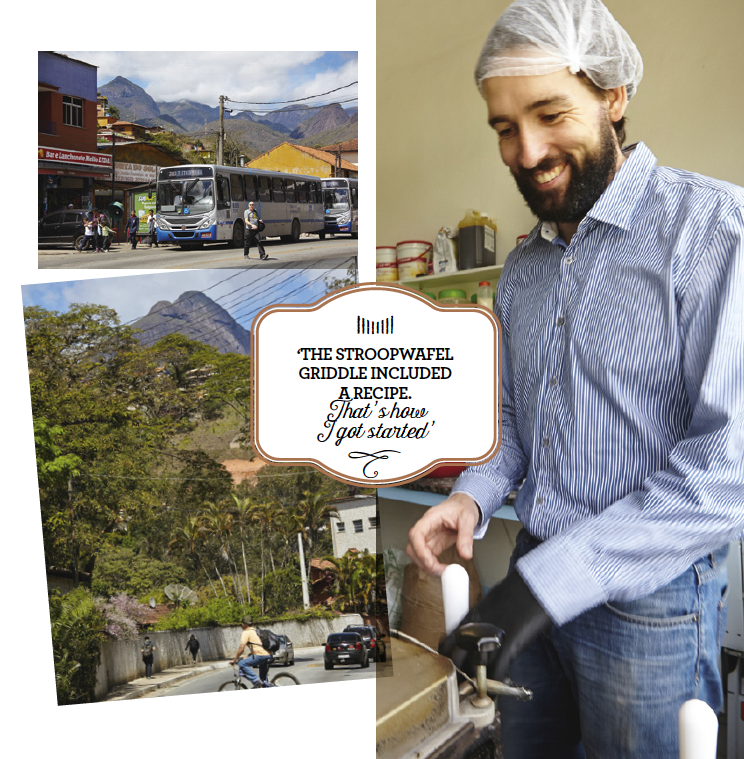 THE FIVE WOMEN IN THE HAPPY WAFFLES FACTORY ARE WORKING HARD. BAS GREINER, THE DUTCHMAN DARK HAIRED LIKE A BRAZILIAN, HAS LITTLE INVOLVEMENT IN THE WAFFLE PRODUCTION. ‘THE WOMEN RUN THE FACTORY VIRTUALLY ON THEIR OWN.’

The women make the waffles by hand. They’ve divided up the tasks well. Neatly rolled pieces of dough that are lying on a shelf will be rolled out into circular slices. Employee Luana will then bake them into lovely round biscuits. Her colleague spreads the sticky syrup between the waffles with a spoon. A third colleague takes the tray full of waffles to a cool room where they can dry. ‘I’m told what needs to be purchased and how the production is going. We bake two thousand stroopwafels per day, and even more around the holiday periods. On King’s Day, a Dutch holiday, we received a large order from the Dutch consulate.’ Letting Brazilians taste a Dutch waffle for the first time always gives Bas a good feeling. After the first bite, a second always follows straight away. Then he sees the twinkle in their eye, before they devour the rest of the waffle greedily. It’s not surprising then that the Dutchman managed to get his homemade Dutch stroopwafels on the shelves of Brazilian shops and on the menu of caf.s and lunchrooms.
Bas: ‘I knew that they would be a hit. I had absolutely no experience of baking stroopwafels. I’d previously travelled about 25,000 kilometres across South America in a Cherokee Jeep. Back in the Netherlands I just couldn’t get settled. Adventure was calling me.’

STROOPWAFEL GRIDDLE IN HIS SUITCASE

The factory where Bas bakes the waffles is in an idyllic mountainside village in Brazil. The traditional Dutch biscuits indeed seem to be an enormous success in Brazil. ‘Brazilians like sweet things, and it’s taken off like wild-fire.’ It began in 2011 with a suitcase full of clothes and a stroopwafel griddle.
With the griddle in his bag, Bas moved in with a friend first of all. In that friend’s kitchen he started delving into how to make stroopwafels: ‘The stroopwafel griddle came with a recipe, so that’s how I started. The great thing about stroopwafels is that you can make them yourself. So you can start small. If you want to expand there‘s a lot to think about, from marketing to management, the baking, the automation of the production. It’s a project I can get my teeth into for years to come without getting bored. And I see a gap in the market.’

It wasn’t an easy start. To begin with, the most important ingredient for the waffles, the caramelised syrup, wasn’t available in Brazil. Bas: ‘I started making the syrup myself. Heat up the pan, sugar in, and get simmering. It was actually quite dangerous, because the mixture gets really hot. When it went wrong, when I let the pan boil over for example, my friend’s kitchen was transformed into a sticky, sugary mess.’ After a while experimenting, Bas started getting the hang of the syrup and the baking. The time had come to put it to the test. He got on his bike with a box of stroopwafels on the back. ‘I went to bakeries and lunchrooms and let the owners taste them. Sometimes I also just offered a stroopwafel to people sitting outside on a terrace. The reactions were positive. “This is a real hit”, I realised. Brazilians eat a biscuit with their cup of tea, but they also like to have something sweet after a hot lunch.’

STROOPWAFELS UNDER THE BED

That Bas could barely make himself understood in Portuguese didn’t matter. ‘I’ve always travelled a lot when I was young and during college, from Japan to Tanzania. And nobody understands you there. The Brazilians appreciated that a Dutchman was trying to build something up in their country. They encouraged me.’ After the first experimental phase in the ‘borrowed’ kitchen of his good friend, Bas rented his own apartment in a more central location in Rio. In a few square metres he produced increasingly large amounts of stroopwafels. He also managed to sell his waffles to bars near well-known tourist attractions such as the famous statue of Christ the Redeemer and on the Sugar Mountain with its phenomenal views. His waffles were also already being sold in both of Rio’s airports. The demand increased and after a few months even the apartment became too small. Everywhere, even under the bed, lay shipments of packaged waffles.

‘Once I had my own name and my own packaging, it suddenly became very professional’, says Bas. ‘I’ve got something with the name ”happy”. It cheers me up. In the Netherlands I had a prawn business, Happy Shrimps. And so my waffle business got the name Happy Waffles.’ Not only were the waffles happy, but Bas too. He married his Brazilian sweetheart Rachel and moved the whole production to the village of Itaipava, Rachel’s home. The beautiful village, more than an hour outside of Rio, attracts rich cariocas (inhabitants of Rio) at the weekend, who enjoy the peace and quiet of the mountains. It’s a bit of a search to find the factory and the small shopping centre. It’s difficult to imagine that in this slick shopping centre there’s a factory going full throttle. But follow the aroma, and you’ll come to two large glass doors in the colours of the Dutch flag. Bas: ‘I love the fact that the women work so independently. I can concentrate on other things within the business with peace of mind. I enjoy working on the packaging. And of course I look for new clients and explore where we can best make our mark.

We also experiment with the waffles, as they can always be better. Just a while ago we launched the stroopwafel with chocolate. These are really selling well.’

Bas continues to make plans. Now he dreams of making the production more environmentally friendly. ‘I would love the factory to function one hundred percent on solar power. And then export the waffles to the Netherlands!’ he laughs. ‘I enjoy every day here. The people are more laid-back, it’s not as over-organised as in the Netherlands.’ That he’s so happy could also be because he is now a father. And so Bas has not only cornered the Brazilian stroopwafel market but has also got to the very heart of Brazilian family life. ‘My life is changing and becoming richer with every step I take here. For me, there was no better way to arrive in Brazil than with that first stroopwafel griddle.’

THE WAFFLE LEFTOVERS ARE COLLECTED IN A LARGE BIN. LUANA: ‘WE SOMETIMES TAKE THE CRUMBS HOME WITH US. I LIVE IN A POOR NEIGHBOURHOOD AND THE PEOPLE THERE LOVE THEM. AT THE WEEKEND I SOMETIMES HAND OUT WAFFLE OFF-CUTS AND MAKE A LOT OF NEIGHBOURS HAPPY.’ THE WO RKERS EVEN MAKE CAKES FROM THE OFF-CUTS AT HOME.